It has taken from nearly every group and corner of society.
Even if healthcare isn't your issue, hyper-inflation takes from your issue.

Rising healthcare costs are the primary cause of wage stagnation in the middle class.

Employers spend more on payroll than ever, yet it's been reported that 80% of all payroll increases over the last 20 years have gone to healthcare costs. For a specific example, 100% of a recent pay raise for teachers was consumed by healthcare costs.

Both employees and employers (public and private) bear the burdens of huge premium increases. 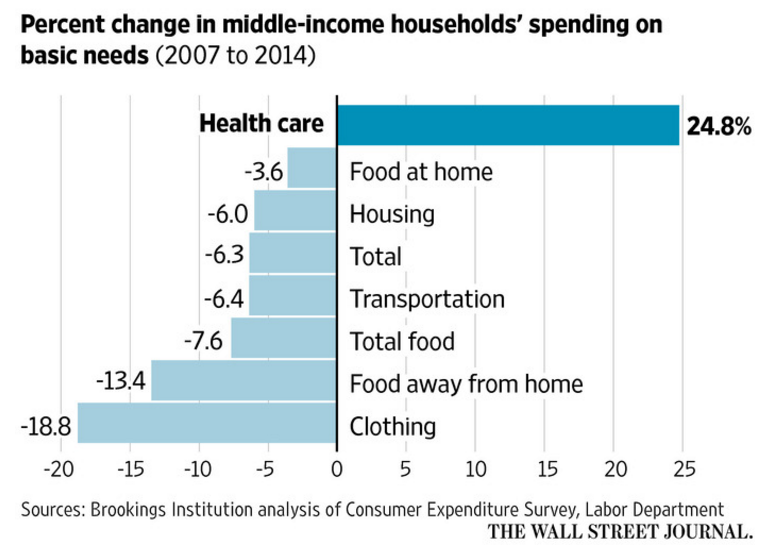 The Washington Post, New York Times, Wall Street Journal, and Time have all reported on how rising healthcare costs cause wage stagnation and middle class incomes to fall. An image from a recent Bloomberg article really drives this point home. 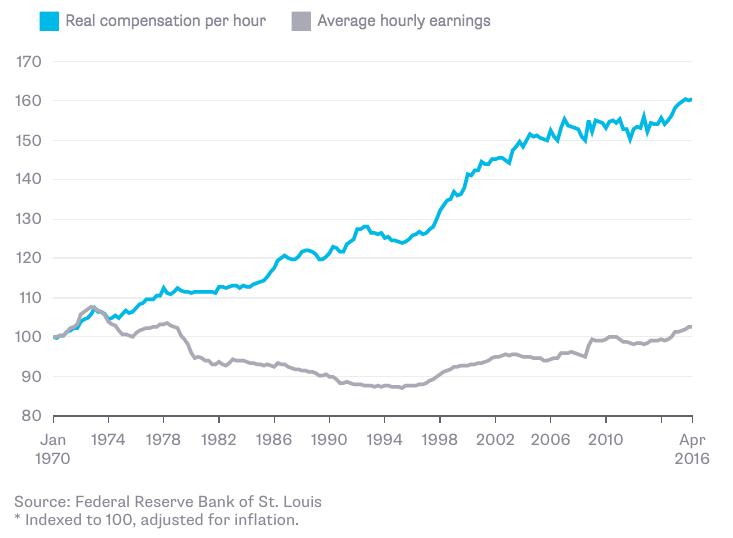 Here's the simplified version of how.

Where are baby boomers instead? $136,200, plus the average baby boomer couple will have $300,000 of healthcare expense not covered by Medicare.

It's estimated that in 2013 the top 30 US cities have $100 Billion in unfunded retiree healthcare benefits and states have $627B.

Our system crushes the doctors, nurses, social workers, other professional caregivers, and our loved ones we rely on for care.

If costs increase at half projected rates, $1.9M of Millennials' $3.8M lifetime earnings could go to healthcare.

There are lots of examples, but David Goldhill's from his book Catastrophic Care drives the point home. His example uses a hypothetical Millennial named Becky to show how $1.9M of her lifetime earnings could go to healthcare. Learn more.

It steals from education, public safety, infrastructure, and other public services.

As the former Chair of the US President’s Council of Economic Advisers said during the debt crisis, “we don’t have a debt problem…we have a healthcare problem.”

It is the (often unspoken) elephant in the room of nearly every resource allocation discussion. Often, this is directly as a result of allocating more and more financial resources to healthcare. Other times it is indirectly by limiting the availability of intellectual, political, and financial capital for other causes.

Hyper-inflating costs create direct and indirect healthcare “taxes” that keeps individuals and other communities from addressing other societal problems.

Confidentially tell your story of how the healthcare status quo has stolen from you.

The good news is many solutions already exist!

Most are relatively easy to implement and non-partisan.
See examples of real-life solutions

Join the movement to accelerate the shift to Health 3.0.
Put aside tired, partisan cliches to advance pragmatic solutions, no matter who pays.
We need all Americans together to fix it.

No spam. We promise.

We're confidentially aggregating stories of people's experiences, the consequences, the collateral damage, and the fixes.
Tell your healthcare story